In my last post, I covered the absolute basics of ray-tracing, primary-ray-casting. I showed how to determine which object in the scene each pixel refers to, and hinted at surface colours and shadows. I’m now going to cover lighting in more detail. (Actually, thinking about it, I didn’t go into any detail about how to determine the actual object the primary rays intersect - so that’ll be another article).

There are many lighting equations used in ray-tracing, but I’m going to cover the most common one here, namely Phong shading. Phong shading works on a per-pixel basis, as opposed to (say) Gouraud shading, which is generally used to interpolate from a less accurate per-vertex basis.

Phong shading is made up of three components: ambient, diffuse, and specular.

The ambient part is a constant that gives a fixed colour to parts of objects that are not directly illuminated. For certain kinds of scenes, this is a reasonable approximation, but for others, a fixed ambient component gives a very “flat” look to the final image. Calculating a better ambient term is beyond the scope of this article, but I’d like to cover it one day. For now, I’ll use a constant ambient term. The ambient part is applied once per lighting calculation. 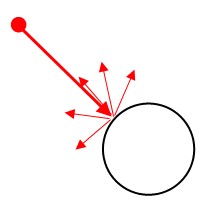 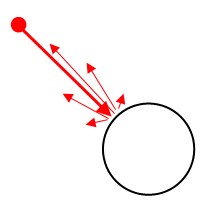 The specular part models the reflection from very shiny surfaces. Very polished surfaces reflect light strongly in one direction (the reflection against the surface), but hardly reflect at other angles. The reflected colour is only really determined by the colour of the light, not the colour of the surface. The specular part is controlled by two numbers: a scaling number, and a shininess factor which determines how “sharp” the points of bright reflected light will be. The specular equation is calculated for each light that shines on the object in question. In general, as the specular factor increases, the diffuse factor decreases, and vice-versa.

You may also want to attenuate (dim) the effect a light has on a surface, if the light is far away. (You may equally not want to - your mileage may vary). In the real world, light is attenuated by the inverse of the distance to the light squared, but in practise, you may want to tweak this a little. I calculate the attenuation of a light source as:

Where d is the distance to the light, and a, b, and c are various contants.

Rather than list the equations for the diffuse and specular parts, I’ve included them as C# code below. I’ve designed my materials to be nested, so that for example to produce the shiny balls in part one, I nest the materials as follows:

Here’s the code. Hopefully you’ll be able to figure out how it hooks into the rest of the ray-tracer through context.